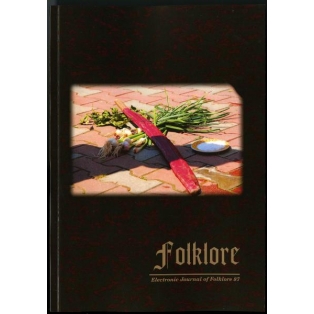 Zoom
Ajakirja Folklore: Electronic Journal of Folklore 87. number on pühendatud reeglitele ja rituaalidele. Autorid käsitlevad traditsiooniliste rituaalide läbiviimise norme ja reegleid ja nende rikkumise põhjuseid; rituaalset käitumist teatud kuupäevadel, kui sotsiaalsed normid, hierarhiad ja soorollid pööratakse pea peale; rituaalse aasta muutmist vastavalt uuele olukorrale (väljaränne, pandeemia) jne. Meie autorid esindavad Hispaania, Venemaalt, Ungari jt maade teadlaskonda.
Lähem vaade inglise keeles:
In the first article of this issue, Irina Sedakova analyses the violation of the holiday bans and recommendations as they are depicted in Bulgarian ethnographic prescriptions and their folkloric poetic versions. She gives examples of the remains of the bans on working and doing certain activities on holidays and shows how the bans are covered by the Bulgarian mass media.
The next article, by Anamaria Iuga and Georgiana Vlahbei, concentrates on the Mute, a central masked character in the Căluș Whitsunday ritual in Romania. It is both a living tradition and an artistic performance, within which the costume and mask simultaneously hide and reveal sexual taboos.
Nina Vlaskina presents her fieldwork on the Nekrasov Cossacks in their processes of emigration and re-emigration, showing how economy is deeply intertwined with culture, nature, and ideology, and how the Cossack rituals have followed a multigenerational historical adaptation.
Gleb Pilipenko and Maria Yasinskaya focus on Easter traditions among Slovenes in the Natisone Valley in the Province of Udine, Italy. They study both Easter customs and the linguistic materials, which demonstrate the results of the contacts between the two languages and two cultures.
Daria Radchenko focuses on Easter festivities during the lockdown in Russia, investigating how believers constructed and reflected the space of the Easter service in their homes, using three key strategies: synchronisation, spacing, and appellation to experience. She questions the so-called “distributed church service” and tries to find out if on-screen rituals enable participation.
Irina Stahl documents and scrutinises the changes in the religious processions and pilgrimages dedicated to St Paraskeva, St Demetrius, and St Nektarios in urban settings under the COVID-19 restrictions. She investigates the new norms imposed by public authorities, the solutions found by the church representatives, and the faithful’s reaction to the new situation.
Judit Balatonyi studies weddings in quarantine in Hungary. Using netnography as well as questionnaires, she discusses macro-contextual factors that influence individual decision-making, replanning, and reinterpretation processes, and follows up by examining how these processes unfolded.
Lidia Montesinos Llinares, Margaret Bullen, and Begoña Pecharromán use the lens of feminist anthropology to study the role of women in traditional “androcentric” rituals in Spain. The authors advocate for the need for progressive changes and propose that researchers should encourage intervention in the field in order to promote gender equality.
The roundtable under the heading “The Life of Rituals During the Pandemic” (transcript by Irina Stahl and Nina Vlaskina) questions the different impacts the recent COVID-19 pandemic had on the ritual year. These impacts were manifold, including emotions, (re)negotiations of space, and the adaptation of research strategies. The discussions showed that new rules appeared during the pandemic, along with violations of the same rules.
Alexander Novik, Irina Sedakova, and Anastasia Kharlamova provide a general view on and a detailed account of some panels of the 15th SIEF congress “Breaking the Rules? Power, Participation, Transgression”. The authors conclude that the main topic of rules, norms, chaos, and anomalies has inspired the researchers to look for new approaches and review the traditional ones in their analysis of sociological, political, and scientific facts as well as the ethnological and folkloristic data.
The news section starts with Emily Lyle’s jubilee announcement, which is followed by a conference review and a review of a workshop within the same conference. The issue also offers an overview of a dissertation and a book review.
Folklore: EJF is a peer-reviewed open-access academic journal published since 1996 and the current issue is available online at http://www.folklore.ee/folklore/vol87.
Tootekood: 100720
Ühik: eks
5,00 €